Home EntertainmentGossips EXCLUSIVE: Zaid Darbar on his chemistry with wife Gauahar Khan: We are pure and true to each other

EXCLUSIVE: Zaid Darbar on his chemistry with wife Gauahar Khan: We are pure and true to each other 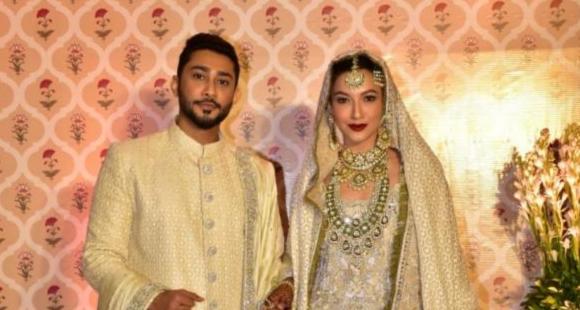 Gauahar Khan and Zaid Darbar got hitched recently and their wedding photos have been lighting up the internet. In an exclusive chat with Pinkvilla, Zaid opened up about his lovely wife Gauahar and also revealed if she gave her inputs for his new studio, Atrangz.

It has been a delightful sight for fans of Gauahar Khan as she recently got hitched with her beau Zaid Darbar and their photos have been winning hearts. The adorable couple tied the knot in the presence of friends and family last month and it was a beautiful affair. Even now, their adorable posts for each other on social media have been painting social media red with love. However, amid all this, Zaid recently launched his new studio, Atrangz in the city and Gauahar also joined in to cheer for her hubby. Talking about it, Zaid spoke exclusively about how he came up with the design ideas for it and revealed Gauahar”s inputs in the same.

Talking about him and Gauhar exclusively to us, we asked Zaid about his feelings on getting so much love from their fans. On that, Zaid said, “About Gauahar and my chemistry, it is so beautiful that is why people are loving it. Mashallah, we are pure and true to each other, and that is the only reason people are liking our chemistry.” As Zaid unveiled his new studio, he even shared that his wife Gauahar also gave her valuable inputs in designing his office in the studio.

We are pure and true to each other, and that is the only reason people are liking our chemistry.

Sharing details about the same, Zaid said, “Gauahar has also given her beautiful input for the interior in my office especially, as we met after most of the things were done. But I’m sure if we would have met earlier, she would have taken care of most of the things. Gauahar sure is an amazing interior designer as my office is looking beautiful because of her inputs. And I feel, when you are true and pure from the inside, the outputs will be amazing, always. And thank you to everyone for supporting and appreciating.” He even went on to credit his Atrangz team members along with Anam & Awez Nagma for their support during the lockdown and getting the studio finished. Zaid said, “It takes a hell lot of time to do the interior of such a big place, and though it was a little tough due to the lockdown, it all went well in the end.”

Zaid was extremely excited about the studio launch but also revealed to us that he felt ‘nervous’ too. He even shared stunning photos on social media of his newly launched studio and fans went gaga over it. Talking about it, he said, “Though it all went really well, as we all were together. The whole team did the best they can to make it work.”

Meanwhile, Gauahar too was present at the studio launch and she came in to cheer for her beau. She along with Zaid’s parents and family came to wish him all the luck. Gauahar even spoke to the media at the launch and praised all the effort done by Zaid and his team to design the studio. The couple together continues to make waves on social media with their adorable photos and well, with Zaid’s new studio launch, fans can expect a lot more fun content from him and Gauahar.

Also Read|EXCLUSIVE VIDEO: Tandav star Gauahar Khan REVEALS when she knew husband Zaid Darbar was THE ONE for her