Home EntertainmentGossips Valentine’s Day 2021: Malaika Arora & Arjun Kapoor give a glimpse of lovely moments as they celebrate together

Valentine’s Day 2021: Malaika Arora & Arjun Kapoor give a glimpse of lovely moments as they celebrate together 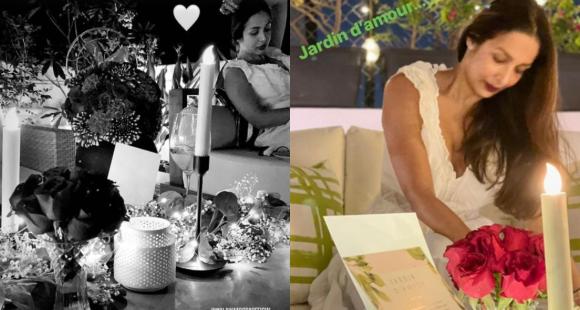 Malaika Arora and Arjun Kapoor have been dating each other for a long time. Meanwhile, check out their latest social media posts.

Valentine’s Day 2021: Malaika Arora & Arjun Kapoor give a glimpse of lovely moments as they celebrate together

Malaika Arora and Arjun Kapoor have been making news owing to their relationship for a long time. Both of them never shy away from admitting their love for each other and multiple instances prove the same. Be it attending fashion weeks or going for exotic vacations, Arjun and Malaika are inseparable and have been spotted at various events and occasions. The entire country is celebrating the occasion of Valentine’s Day and the couple has also done the same.

Both Arjun and Malaika have shared multiple glimpses of their lovely moments on social media which have sent the fans into a frenzy. One can see the fairy lights, the white curtains, scented lamps, and all the romantic settings amid which the couple celebrated Valentine’s Day. Arjun also gives a glimpse of Malaika in one of his pictures while tagging her in the same. However, the actor did not share any picture of himself in the posts. The diva, on the other hand, also shared another picture on her handle. Malaika Arora had made her relationship with Arjun Kapoor Insta official a long time back. Post that, the couple often used to tease fans by sharing pictures of each other on social media. Meanwhile, Arjun Kapoor is currently waiting for the release of Sandeep Aur Pinky Faraar which also features Parineeti Chopra. Apart from that, he also has Bhoot Police lined up co-starring Saif Ali Khan, Jacqueline Fernandez, and Yami Gautam.

Also Read: Arjun Kapoor opening car door for Malaika Arora proves that he is a doting boyfriend to his ladylove; WATCH